The European Parliamentary election results have been announced.

In Yorkshire and the Humber, six MEPs (Members of the European Parliament) were elected as follows:

Leeds City Council announced the results on behalf of the region. See the full results here.

In Hull, the turnout was 24 per cent.

The number of votes by each of the nine parties in Hull were as follows:

It has powers in a range of areas that affect member countries and can approve, change or reject new European laws.

The European Parliament was directly elected for the first time in 1979 and the last election was in 2014.

5 things to do this Bank Holiday weekend 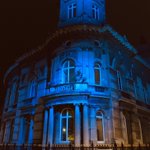