Will Young to perform at Bonus Arena in Hull

Singer Will Young is the latest star name to confirm an appearance at Hull’s Bonus Arena.

The pop star will perform at the £36 million venue on Monday 21 October. Tickets will go on sale on Friday 29 March at 9am.

Young last performed in Hull in 2017 as part of the city’s LGBT 50 celebrations.

He shot to fame in 2002 with an appearance on the Pop Idol reality TV show.

Since then, he has recorded four number one and two number two albums, two BRIT Awards and four UK number one singles, including Leave Right Now and Light My Fire.

The announcement comes ahead of Young’s long-awaited seventh album Lexicon, set for release on June 14.

New special educational needs provision could be rolled out across Hull

Do you have any of these symptoms? No one in your household should leave home if any one person has symptoms.

Find out more at http://nhs.uk/coronavirus 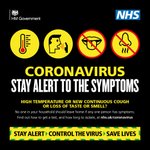