It’s Love Parks Week, so pack up the picnic and head to one of the city’s great green spaces this weekend. We have put together five facts about the city’s parks – some you will know, but some might surprise you …

1. None are as big as East Park The clock at East Park.

You probably knew East Park is the city’s biggest, but did you know this 130-acre park in Holderness Road is Grade II-listed? This huge green space was one of the most ambitious of Hull’s Victorian parks. It was opened in 1887 to mark Queen Victoria’s Golden Jubilee, and was subsequently extended. It has a large lake and a rocky grotto known as Khyber Pass.

Its much-loved splash boat, likewise Grade II-listed, was built in 1929 for about £1,400 – which would be about £87,000 today. It has ensured children from east Hull and beyond have been squelshing their way home in soggy shorts and shoes for generations.

The park also has an Animal Education Centre.

2. Pickering Park once housed one of the city’s best museums The Museum of Fisheries and Shipping, Hull’s first nautical museum, opened in Pickering Park in 1912. It moved to the former Hull Dock company offices – and has since become the Hull Maritime Museum.

Pickering Park, laid out in 1909-11, was the generous gift of trawler owner Christopher Pickering. He had a very elaborate vision for his park. It originally featured a church – an unlikely memorial to King Edward VII – which had to be demolished because it had been poorly constructed.

The iron gates and the Pickering Almshouses provide a stately entrance to a great community resource for the people of Hessle Road. The park now features a beautiful fishing, a great collection of native and exotic trees, an ornamental garden and a summer paddling pool. It is easy to see why poet and famous former Hull resident Philip Larkin spent much of his time living in the city in a house overlooking the city’s beautiful “People’s Park”, which has featured in his work.

The city’s first park was donated to the town by philanthropist and ship-owner Zachariah Charles Pearson. It was opened with great celebrations in 1862. After unwise investments – and an ill-fated attempt to save his business by running guns to the Confederacy – Pearson had to resign as Mayor, and his park was completed by fellow Councillor William Moss.

It is currently being restored thanks to a grant from the National Lottery Heritage Fund. Its recognisable archway was removed for refurbishment in December and will be repainted a rich cream colour with accents of green.

4. West Park is full of tigers Not really – though it has been the site of the KCOM Stadium, home of the Tigers of Hull City AFC, since 2002. If you want to see real animals without huge teeth and claws, head over to the park’s wildlife aviary.

West Park was opened in 1885 in the new suburb of Beetonville. It incorporates buildings by city architect Joseph Hirst, including the adjacent Arts and Crafts-style former Carnegie Library.

Every Hull resident already knows that the park also hosts Europe’s largest travelling funfair, Hull Fair, which visits every October. The park also has some of the city’s best sporting facilities, as well its own model railway.

5. Hull’s parks were once a place of wartime refuge During the Second World War, Hull’s parks provided much-needed refuge from destruction and the stress of living in traumatic wartime conditions.

They were also taken over in part for war service as temporary storage buildings were built in East Park, while Springhead Park was home to troops of the Free French forces.

HCAL, the company owned by Hull City Council to run many of its leisure facilities, manages more than 100 parks in the city. Peter Pan Park next to Costello Stadium was refurbished last year and has its own Parkrun, while Bude Park in Bude Road for some wide open green spaces. Find more about Hull’s parks here.

The new #NHSCOVID19app is the fastest way to see if you’re at risk from the virus. The faster you know, the quicker you can alert and protect your loved ones. #HaveYouDownloaded 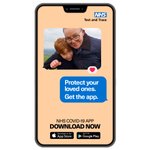