The most popular baby names in Hull for 2018 have been revealed.

The Office for National Statistics (ONS) released the annual data on Thursday 29 August.

Artwork from prisoners in Hull goes on display in the city 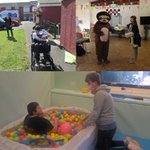