Hull City Council has paid tribute to the “tremendous contribution” made to the city by the executive director and joint CEO of the Freedom Festival, Jenny Howard-Coombes.

Freedom Festival announced today that she will be stepping down from her role following this year’s festival.

Jenny was the first employee to join Freedom Festival Arts Trust in 2012 and has been instrumental in the growth of Freedom Festival, as well as being a key cultural player in the city and Hull’s successful bid to become UK City of Culture in 2017.

Councillor Stephen Brady, Leader of Hull City Council, said: “Jenny has played a pivotal role in developing and evolving Hull’s cultural landscape during a transformative time for the city.

“Under her leadership, Freedom Festival has grown into a world-renowned international arts festival, attracting innovative and incredible performers from across the globe, as well as giving a platform to talented artists in our region.

“I wish her the very best for the future and thank her for her tremendous contribution to our city.” Freedom Festival celebrates, through artistic and cultural expression, Hull’s independent spirit and historic contribution to the cause of freedom.

Jenny is taking up a new role in the autumn with the National Trust for Scotland.

Jenny said: “I feel incredibly proud and privileged to have played a role in the amazing journey that Freedom Festival Arts Trust and the city have been on. I have no doubt that both will continue to seize opportunities and maximise their global reputation as they continue to thrive.

“This has been a very difficult decision to make, however after seven years the time is right for me to embark on a new challenge.

“My experience with Freedom Festival Arts Trust will never be replicated. I will leave with a heart filled with once in a life-time memories and also the knowledge that, when given the opportunity, people can and do make a huge difference to our communities. Hull has been raised up by the people within and it’s been an honour to witness the city and its people being celebrated.

“I would like to take this opportunity to thank everyone who has been on this incredible journey with me.”

Are you passionate about making a positive and lasting difference for the people of Hull? Find out what social worker vacancies we have available here 👉https://bit.ly/3gnMNxw 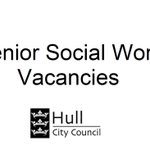