Two in five visits in Hull in 2017 were made to Hull Culture and Leisure (HCaL) venues, new figures have shown.

HCaL, which operates leisure and culture services on behalf of Hull City Council, has overseen record visitor numbers to its sites.

A preliminary evaluation by the University of Hull has shown 5.3 million people attended 2,800 events, exhibitions, installations and cultural activities as Hull celebrated its year in the national spotlight.

Of these visits, 40 per cent were at venues managed by HCaL, such as the citys museums, theatres, halls, libraries and parks.

This includes The Ferens Art Gallery, which hosted an array of critically acclaimed exhibitions including Skin, plus events such as Poppies: Weeping Window installation in Queen Victoria Square, The Big Malarkey Festival, the Quentin Blake Roald Dahl Portraits exhibition at Hull Central Library and The Royal Ballet at Hull New Theatre.

HCaLs teams managed a huge increase in workload as the city hosted 2,967 exhibition days, 9,220 film screenings, 510 participant opportunities such as workshops, classes and courses for the public and 26,791 schools engagement opportunities. All the events were free. Some 850 volunteers worked at HCaL museums and galleries, completing more than 23,000 hours.

The gallerys high-profile exhibits were headlined by the restored 14th-century gold panel painting Christ Between Saints Paul and Peter by Italian Pietro Lorenzetti. Works by Francis Bacon, Rembrandt, Lucian Freud, Eduard Manet, Spencer Tunick and Ron Mueck, plus the four artists shortlisted for the Turner Prize  the worlds most prestigious contemporary art award  went on display at the gallery.

The busiest day across all HCaL venues was Saturday 25 November with 14,500 visits as the Magic of Christmas festival opened in the Museums Quarter  a week before the Turner Prize winner was announced.

Councillor Terry Geraghty, Portfolio Holder for Culture and Leisure and Chair of Hull Culture and Leisure Limited, said: HCaLs teams performed incredibly well under immense pressure and held a key role in ensuring the tremendous success of Hulls 2017 UK City of Culture year. It is extremely reassuring to know that such a capable group is running the citys culture and leisure facilities and activities.

Hull Maritime Museum in Queen Victoria Square celebrated a record-breaking year as more than 345,000 people visited the museum  an increase of 393 per cent on 2016. Bowhead, the awe-inspiring audio-visual installation featuring a massive computer-generated whale, attracted 101,534 visitors. The museum also hosted Bill Baileys Cabinet of Curiosities and A Common Foe, which looked at the relationship between Hull and Iceland.

Councillor Geraghty added: These impressive figures are a testament to the Hull Maritime Museums commitment to hosting fantastic, unique exhibitions. It shows just how eager the people of Hull, and also visitors from the surrounding area, are to learn about the citys maritime past.

Last years Big Malarkey childrens literature festival attracted 7,800 people, including 2,400 children from schools in Hull. The festival, which produced by Hull Libraries, included more than 100 events featuring names including Julian Clary, Jeremy Strong, Akala and Lydia Monks  with 100 per cent of survey respondents saying they would return for a future festival.

This years Big Malarkey Festival will take place in East Park in Hull from Wednesday 20 June to Sunday 24 June. Organisers are now working hard to assemble a packed programme featuring some of the UKs favourite childrens authors and illustrators, plus poets, musicians, artists and creative performers.

If they're still in good working order you can donate them at any of your local Household Waste Recycling Centres. All your donations help support Dove House Hospice 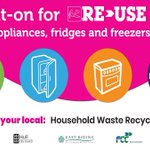