Enterprising youngsters have created a travel card making it easier and cheaper for young people to travel around the region.

The KAT Card, created by Hull’s Young People’s Parliament (HYPP), allows young people aged 19 and under to ride buses in Hull and parts of the East Riding for just £10 per week.

700 youngsters have signed up to the card so far.

The idea for the travel card came from the HYPP, which identified transport and the cost of transport as the key issue for young people in the city

Members of the HYPP then met with Hull City Council and bus companies to turn their idea into a reality.

Kaitlyn Robson, 16, and Scarlett Rowland, 13, were two of members of the HYPP who pushed for the card to be introduced.

Kaitlyn said: “Young people identified transport as their key issue, so we met with councillors and bus companies to create something that would allow young people access to cheaper transport. It makes transport more accessible, especially for children from poorer families.”

Every year, members of the HYPP vote on what issues should be made a priority in a ballot called Make Your Mark.

Scarlett said: “We have a yearly ballot called ‘Make Your Mark’ which allows young people to vote on the main issues that they face.

“After identifying transport as a key issue, we started a transport campaign and came up with the KAT Card as its name.”

Kaitlyn added: “A lot of young people care about transport and getting places, whether it be school or visiting family members, and this card makes that much easier.”

The Hull Young People’s Parliament gives young people a voice locally, and also allows them to join the political conversation nationally at the UK Youth Parliament.

The KAT Card is jointly funded by the council, Stagecoach and EYMS.

Today we announce an extension of our closure to November 2020. For all rescheduled show information please visit our website: https://bit.ly/2U54qZw. Thank you to all our audiences and partners for your continued support. 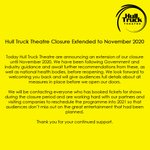