Singer-songwriter Emeli Sande is to visit Hull’s Bonus Arena in December as part of her UK tour.

The vocalist will visit Hull on the last night of her 16 date UK tour, which starts in November after the star releases her third album, Real Life, in September.

The Hull concert takes place on Friday 13 December, with tickets going on sale on Friday 14 June at 9am.

Sande has sold more than 19 million singles including three number one UK singles and more than six million albums.

The singer has won four Brit Awards and in 2018 was awarded an MBE for services to music.

How therapy service is using ICT funding to grow business

Are you all booked up for our first Rusty Riders course next week on the 7th?! 🤷‍♀️

Our Rusty Rider courses over the next few weeks are fully funded and in partnership with @Hullccnews - thank you! #CycleTraining 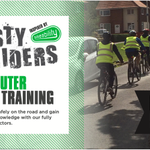