150 people will form a human mosaic in Trinity Square on Saturday to celebrate 25 years of Fairtrade.

The mosaic will form the familiar and iconic shape of the Fairtrade Mark.

It will include some of Hull’s blue-coated City of Culture volunteers, as well as Fairtrade campaigners from around the region dressed in the iconic colours of blue, green and black.

Michael Gidney, chief executive of the Fairtrade Foundation, said: “Twenty-five years ago most brands paid little attention to the human cost of their business and most people were unaware of the poverty and degradation that was the reality of life for millions of farmers and workers around the world.

“Fairtrade set out to change that and put people and the planet before profit. Many said it couldn’t be done, but the public took Fairtrade to their hearts and into their shopping baskets from Day One.”

1.6 million farmers and workers across the world are supported by the Fairtrade Mark.

Stalls selling fair trade food and crafts will be open in a special pop-up market inside Trinity Market, where you will also be able to find out more about Hull as a Fairtrade City and Yorkshire as the UK’s biggest Fairtrade region.

The mosaic will be formed at 12pm on Saturday 5 October. 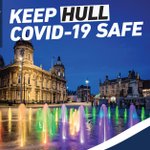